John Terry has been pictured at the Russian Embassy as he appears to be closing in on a move to Spartak Moscow.

According to Russian reports, Terry has been awaiting a decision on his VISA ahead of a potential move.

It had been claimed that Terry’s potential move to Russia was in doubt, but that no longer appears to be the case. 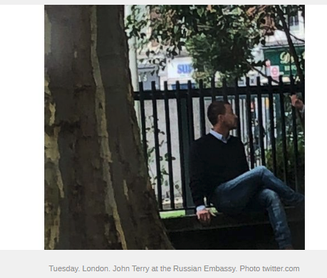 Both Spartak and Aston Villa were keen to sign the player, who has been a free agent since leaving Villa Park at the end of last season.

The ex-Chelsea defender has already undergone a medical in order to complete a move, while personal terms are also believed to have been agreed.

Despite the deal being held up, Terry is now expected to earn around €1.9m during his time with the Russian club.

Villa had been hoping to re-sign the player, with Steve Bruce’s side currently short of options at the back.